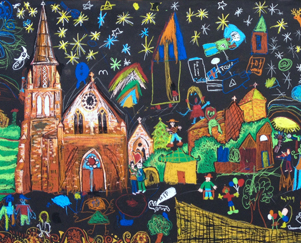 Dec 13 - Jan 14
Mudgee Underground presented a bit of a bonus project over the holiday period, creating a trio of collaborative blackboard artworks at three big events in the region.
The blackboard project began when Mudgee Fine Foods and Mudgee Arts asked us to present a public art project at the annual Christmas Makers Market in the grounds of St Mary’s Catholic Church.
We decided to paint up a big blackboard – on board donated by Burrundulla Kitchens – and set about depicting all the fun and life of the markets, inviting everyone who passed to add something to the big market scene.

Dozens of children joined in, working alongside Sam Paine to create a wild and colourful scene that will probably find a permanent home in the churchgrounds.

This led to invitations from Barnardos and the Gulgong Folk Festival.
Sam was again joined by a troupe of children at Mudgee’s Carols in the Park to create a double-sized celebration of Christmas that is expected to hang in the Barnardos office to provide the staff with a bit of colour and inspiration!

At the Gulgong Folk Festival, Sam and the local and visiting children depicted Gulgong, complete with the Folk Festival musicians – and with the contribution of a smiling yellow sun by Member for Orange Andrew Gee.

Thanks to Burrundulla Kitchens for providing us with so many boards, and to the three events that trusted us to make something fun! 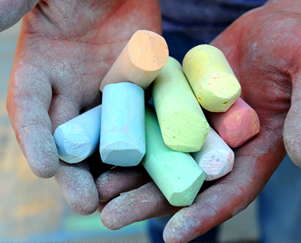 Dec 7 2013
One of the big events in the arts in Mudgee in 2013 was the renovation of the Town Hall building, which gave us an expanded library and an improved theatre, and also turned the walkway beside the library into a comfortable courtyard.

Mudgee Underground made use of the courtyard with our December chalk festival.

The collaboration between Mudgee Underground and Mudgee Library brought a burst of colour to the heart of town, filling the courtyard and spilling out onto the footpath by the afternoon.

Many participants came especially to be part of the Chalk Festival, but some of the most excited artists were those who came across the event by accident and were invited to take up some chalk colours.
There were dragons, trees, rainbows and self-portraits, all created in the world’s number one temporary art form.

A row of succulents in takeaway coffee cups allowed chalk artists to take a plant home, as long as they filled its place in the garden bed with a chalk flower. 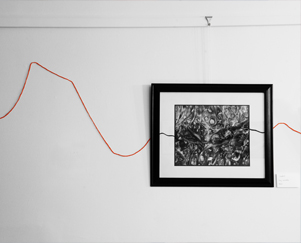 Nov 14 2013
We invited some of the Mudgee region’s favourite artists to contribute to an exhibition with just one stipulation – each work needed to have a line running through it from one side to the other.

The line ran through a series of vastly different pieces, along a hilltop, a branch, a wing, a balustrade, with a red string following the line on the wall between the works.

The exhibition was hosted by Alby + Esthers, a new café and wine bar that had then only been open for a few weeks in Mudgee’s most scene courtyard space. We were pleased to be the first to exhibit there! 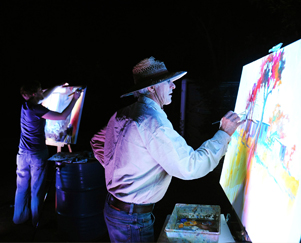 Sep 28 2013
Well, Mudgee Undergroundís Art Battle at Fairview Artspace was a spectacular triumph! Probably its most exciting result, aside from an entertaining night and two fully-finished paintings by the end of the evening, was that we raised more than $3000 that will fund Mudgee Undergroundís upcoming activities.

After a Pictionary contest between several audience volunteers, much-loved Mudgee artist Ross Kurtz took on the Undergroundís own Sam Paine in a fast draw contest, with 90 minutes to go from a big blank canvas to a completed artwork. Local rock legends Fig Jam played an all-improvised 90 minute set during the battle, while Fairview served food and the Small Winemakers Centre poured the wine. Finally, auctioneer Hugh Bateman stepped up to help us sell the two finished works to the highest bidders! After an action-packed auction, the winners were James Hickey and Catherine Bateman, and the auction raised a combined total of over $3000. 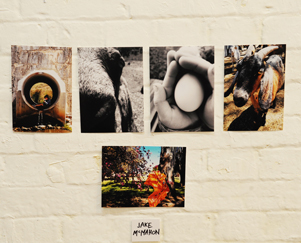 Sep 28 2013
Our second event was the Photo Treasure Hunt. Around forty photographers came along to tackle our secret list of five treasure hunt items: See, Hear, Smell, Touch, Taste. With cameras, iPhones and plenty of imagination, they set off around town to capture a picture for each subject before returning to download their files with the Mudgee Underground team.

We kept Harvey Norman’s photo printing department working past closing time to print more than 200 pictures. That night, we exhibited the full collection in Mudgee’s Stables gallery, converted from the old police Stables, and handed out awards to our best photographers. 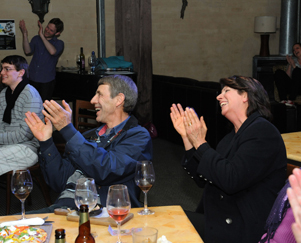 The evening was such a triumph that Roth's Wine Bar has already reserved the first Wednesday of every month for a Bogan Comedy Games night.

A group of locals, ranging from experienced performers to first time improvisers, spent Saturday afternoon in a workshop with our special guest, award-winning Sydney impro performer Patrick Magee, before taking to the stage in the evening to present two hours of unrehearsed comedy games.

The audience was kept in stitches while performers delivered hilarious and unexpected stories in games that forced them to improvise a poem, an interrogation, a trip through history and more.

Catch us now on the first Wednesday of every month at Roth's Wine Bar for the ongoing Bogan Comedy Games! 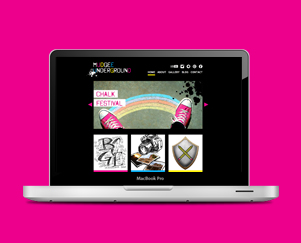 July 30 2013
We thought we'd better let people know about our first event so, along with a website that's being deftly crafted by one of our team, another member organised a story in the paper. We'll definitely put the photo up once we have it. We're trying our hardest to remain anonymous but we realise our attempts will be futile in a small country town! 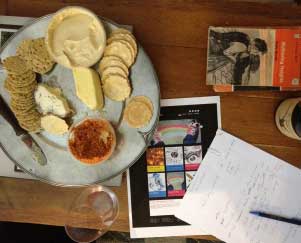 July 21 2013
The rough date for our first event was August. It was nearly August!!! A meeting was hastily called and the four main team mates met, devoured cheese and discussed serious dates. With so many ideas, a few achievable events were chosen and the first will be the Bogan Comedy Games workshop on 10 August. Exciting!!

May 12 2013
The iPhone bleeted its chirpy tone on 9 May. "Bogan Comedy Games night". Crap. We'd completely forgotten about the whole idea since walking out of the wine bar more than six months ago. But the alarm sparked the idea again and a more formal meeting was set for the same wine bar and the core group of enthusiasts. One had recently taken part in a Sydney Art Battle and had successfully made it to the finals. Fuelled by the experience, he was keen to see if the event could work in Mudgee. We were joined by another local talent, a photographer who was about to put on her first photography exhibition. It was decided that the team could manage to put on one event a month for six months to encourage amateur art enthusiasts out of the woodwork. 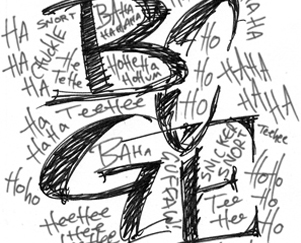 October 10 2013
Picture this ... a dimly lit wine bar courtyard with tea lights glowing red through coloured glass on each table. One particular table was covered in wine glasses after a group had converged on the space. All knew each other, but not well.

It was the mention of arts that sparked an interest between them all. They discussed a need for more amateur theatre in the town. The noisy chat heightened with excitement, and a date was set for the first Bogan Comedy Night - theatre sports with a Mudgee flavour. The date punched into an iphone calendar for May 2013, the group departed, excited by their chance meeting and the anticipation of a new project.